Some members of the Civil Society Organisations (CSO) have taken part in a “peaceful” protest against raising tuition fees at against University of Malawi (Unima) and called for the reopening of Chancellor College in Zomba. 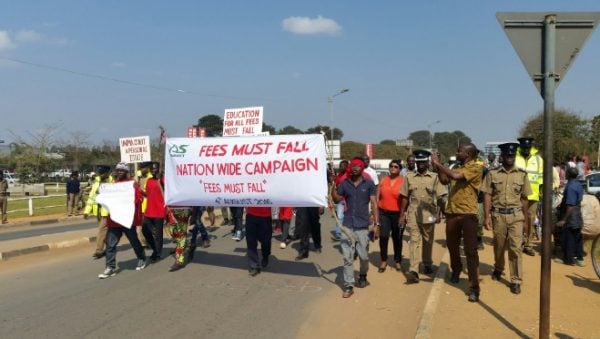 CSOs marching in Mzuzu against University of Malawi fees hike Apart from demanding that fees must fall, CSOs are also demanding the opening of Chancellor College The CSOs proceeded with the demos while President Peter Mutharika was having n audience to University of Malawi Students Union (Umsu)  to discuss on the same issue.

Protest orgnaiser, Charles Kajoloweka exedutive director of Youth and Society (YAS)—an organization which advocates for youth issues in the country, said: “It is a peaceful student protest against the rise in tuition fees at the University of Malawi.”

He said they demand for a non-implementation of the current hiked fees by the Unima Council and immediate re-opening of Chancellor College.

Presenting  a petition Mzuzu City Civic Offices after  demonstrations  from Katoto Secondary School, the activits  demanded that University of Malawi Council should bring down the hiked fees and that Chancellor College, which has been closed following demonstrations on the same, should be reopened immediately.

“We consciously find students’ expression of discontent over the fees hike extremely genuine, patriotic and heroic at a time when the economy is severely anaemic and decrepit,” said Kajoloweka.

He said the University Administration itself has expressed the same point of view in terms of rising costs of running the University.

“The students are justified to defend themselves and Malawian society at large against this insensitive and unjustified fees hike by the UNIMA Council. We therefore endorse the students’ position geared to jealously defend the Right to Education on behalf of all citizens. A wider perspective of these protestations seems to reveal a notion that these students see things beyond them. This is a patriotic stance worth applauding.

“The students are also sympathetic to other young Malawians capable of entering University, who are kept out by impediments such as fees hikes, apart from the demonic quota system,” he added.

The CSOs condemned in strongest terms the Peter Mutharika led government failure to amicably resolve the students’ grievances following the fees hike finding the action by the Government as “highly insensitive, development unconscious and unacceptable.”

They  argue  that the conduct “smacks of total leadership failure by both the University Council and the DPP administration under President Peter Mutharika.”

Kajoloweka said fees hike stalemate at UNIMA is not only a students’ issue, but a national development issue with deep public interest that needs redress.

They demanded the reopening of Chancellor College which was closed after students protested aginst fees hike.

CSOs state that closure of the college is not a solution, just like it was during the Academic Freedom standoff and that “the economy in the land is anaemic and decrepit, and cannot support life, including fees hikes even if there could have been merit.”

“Government cannot continue to use closure of institutions of higher learning as a tool of intimidation and abdication of its responsibility,” Kajoloweka said.