Britain has called for better sharing of information on who is planning to do what and when  to the humanitarian response for Malawi  as it is is facing its worst food crisis in more than a decade. 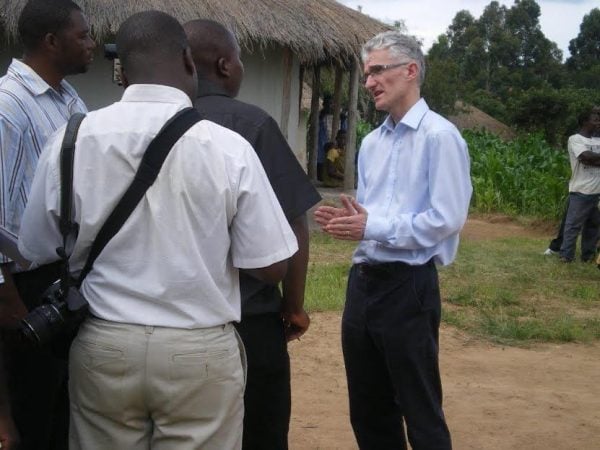 Malawi hunger crisis is, the result of a combination of factors, including drought, floodsendemic poverty and the effects of the HIV/AIDS pandemic.
The Malawian government estimates that 8 million people – half the country’s population – will require food aid by the end of 2016.
Permanent Secretary of the UK’s Department for International Development, Mark Lowcock who recently met President Peter Mutharika in Lilongwe has  said it is  is vital that “there is absolute transparency” on what purchases are being made and when food will arrive.
Lowcock said Malawi government has put in place “excellent plans, but too few people know about them. “
He said government could help by publishing its plans for the release of the food: making clear at what price it will be sold, and to whom.
The British official also said development partners must be equally open on their assistance.
“ Without transparency, the response will be inefficient, the risk of corruption will grow and speculators and the privileged few may benefit at the expense of the majority,” he said in an statement containing his advice made available to Nyasa Times.

He also called for stronger coordination to ensure issues and problems with implementation are addressed and resolved faster, bringing together those responsible for commercial imports with those focused on the humanitarian response.
“ This needs to be led at a very high level by Government, but the international community must play its part. Everyone involved in the response, including government ministries, the NFRA, ADMARC, development partners, UN agencies, civil society and the private sector needs to be clear on what is expected of them,” he said.
The British official said government should make  purchases and sales of maize through ADMARC in  more transparent, predictable and rules-based.
“ At present, the lack of transparency and rules surrounding ADMARC interventions in maize markets means that the private sector has little incentive to sell maize to consumers, worsening the food shortage,” he noted.
Lowcock said Britain has  committed K45 billion to the humanitarian response for Malawi since October last year and could provide more.
He disclosed that “ up to an additional K10bn of UK funds has been identified to assist the Government and the World Food Programme with maize distribution.”
But Lowcok said Malawi government can act now to avoid a further crisis next year.
“ Government could put in place an open consultation platform involving producers, traders, donors, and ADMARC in order to consult on the way forward for maize market reform and transparency.
“I was pleased to hear that ADMARC is working with IFPRI to consider ways that it can reform its interventions in the market.  The key point is to create positive – not negative – incentives for producers and the private sector to minimise the risk of inadequate production in future years. Strengthening Malawi’s commodity  exchanges could help with this,” he said.
Lowcock said the international community also needs to step up, rapidly delivering pledges of increased support to help Malawi tackle the crisis.
“ And Malawi’s neighbours need to help too, fulfilling commitments made in SADC to ease trade flows and improve transport and logistics.”
Lowcock pointed out that Malawi’s food insecurity situation is not caused by weather patterns alone.
“More food could be produced in Malawi if the policy environment lent itself to investing in commercial production. Export bans and the Government’s intervention in markets lead to price volatility that makes investment a significant risk.
“Challenges in the broader environment, including lack of investment in irrigation, research and extension also limit productivity in agriculture.  Without significant diversification, Malawi will remain highly susceptible to variations in weather patterns and world prices. Policy reform, followed by investment, can fuel a more diverse economy,” he said.
He nonetheless noted that  there are  emerging signs of these reforms.
“ With further political will, President Mutharika’s government can deliver the watershed change in Malawi’s food security and economic fortunes that the country needs and its people deserve,” said Lowcock.